Basile Huez is a young product designer trained at the Design Scool of Nantes (France). After completing internships at JM Wilmotte and Christian Biecher, he decided to end his studies to stand on its own. He works primarily since 2006 in collaboration with Christian Ghion on various projects, such as Display Vuitton in Paris Pastry Pierre Gagnaire Tokyo, the restaurant Pierre Gagnaire Reflets in Dubai. By Christian Ghion, he participated in group exhibitions, including "Paris Capitale" at Maison & Objet 2009, when he joined for the occasion in designer Benjamin Tortiger to create the mirror "Traffic."

Benjamin Tortiger is a graduate of Fine Arts in Orleans and completed his training at the Ecole des Arts Decoratifs in Paris. 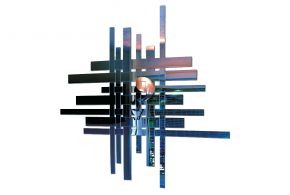